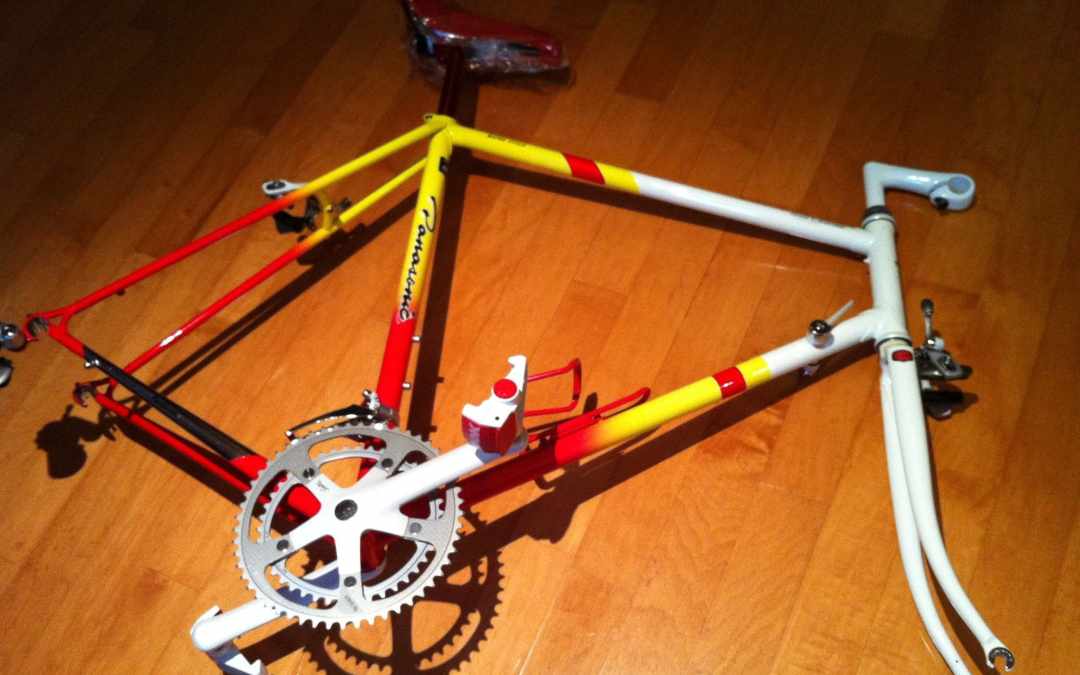 As it turned out, the sale of one of the bikes in my collection put me in touch with a local Panasonic enthusiast who just happens to also be a very experienced wheel builder.  Problem solved.  The wheel sets should be complete in just a few more days which means that the PR-6000 will debut here on the site in the near future. 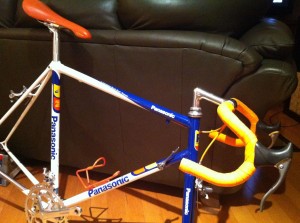 The new old stock build of the 1989 PICS Team Custom will likely debut shortly after.

For those of you who haven’t been following this site or these two builds, they are both rather exceptional bicycles with interesting stories.

The PR-6000 was never sold here in North America so your odds of finding one for sale here are slim to none.  I had been aware of them in the early nineties and always thought they looked like amazing bicycles but I couldn’t buy one here since Panasonic quit selling bicycles here in the U.S. after 1989.   As luck would have it, I would I would cross paths with another Panasonic bicycle enthusiast named Melvin who happened to live in the Netherlands.  Melvin owned several unique Panasonic including a PR-6000.  After learning of my desire to own one myself he kept his eyes open in his regional classifieds and eventually sent me an add for a little used PR-6000 frame and fork that was available.  I jumped at the opportunity and with Melvin’s assistance had the frame shipped to America from the Netherlands.

The PR-6000 frame and fork is unique from the others I have seen in that it was built using Tange 1 tubing rather than Tange Prestige.  I have never seen another like it, nor had Melvin.  Given the custom built-to-order nature of the PR-6000 it does not surprise me to find that mine has Tange 1 tubes and a unique fork design from the other PR-6000 models I have seen.  I decided to make my PR-6000 a bit more personal and decided to play off of the orange highlight in the paint scheme a bit.  For components it was a matter of sourcing very good used or new Dura Ace bits from all over.  It took nearly three years from the time I bought the frame until completing the piece by piece build.  Finding the orange Flite saddle alone took 2+ years! 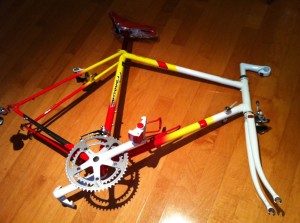 The 1989 PICS Team Custom is also a very rare find.  It was located in a box in a barn in Illinois during the spring of 2012.  Upon opening the box, a rare new old stock frame and fork came out to see the light of day for the first time since 1989.  The “Naper Cycle” on the top tube refers to Naperville Cyclery in Illinois which was the dealer who had originally ordered this frame and fork when new.  Unfortunately the dealership closed and for some reason this bike was never built.  The remaining parts and inventory were put into storage and would eventually be discovered years later.  In addition to the frame, I managed to get some new old stock Look racing pedals and a rare PICS dealer display out of the same barn stash.  It seemed like a rare frame that was worthy of a rare part group.  I assembled a collection of new old stock Shimano Sante components to make it a bit more unique.

Thanks for reading and ride safely everyone!