I became a Panasonic owner in October of 1985 when I received a Panasonic Team model for my birthday. If I remember correctly, the bike cost $330 at the nearby Panasonic dealer (Lakeside Cyclery) in Clear Lake, Iowa. One of the few photos of my old Team is shown below. 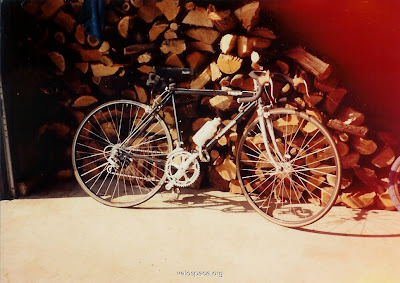 I rode the Team for not even two years before it was stolen prior to RAGBRAI one year. Bummer! On happier note, I just bought another 1985 Panasonic Team. See the 1985 bikes by model listings for photos.

In my quest for a replacement I once again went to my friends at Lakeside Cyclery in Clear Lake, Iowa. I had looked at a 1988 Schwinn Tempo at a local bike shop that was pretty nice and had a red/white/green color fade and (I think) Shimano 105 parts. I know now that the ’88 Tempo was in fact quite a sweet bicycle, but back then Schwinns weren’t exactly cool around here. I mean, the fat kid who sat in the corner in art class and ate paste rode a Schwinn. Forget it! 😉

I was waiting for my insurance check to come in so I could buy the bike I really wanted, a 1988 Panasonic DX-4000 with Tange 1 tubing and full Shimano 105 parts group. (see below)

Cool bike isn’t it? Well, as it turned out, my ship would soon come in as they say. When my insurance check arrived I was overjoyed to discover that the uber-cool Panasonic DX-5000 was now within my reach thanks to a late season sale. Goodbye DX-4000, hello DX-5000! 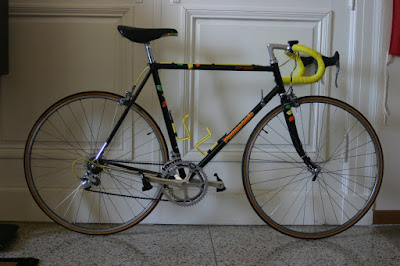 The bike above was purchased on July 20th, 1988 from Lakeside Cyclery in Clear Lake, Iowa. I paid $585 ($608.40 out the door with tax) for it back then. As you can imagine, I really loved riding this and took great care in trying to maintain it to the highest level.

The same bike shop has looked after it all these years… even the same mechanic (thanks Russel)! The only thing that isn’t original to this bike as pictured would be the saddle, Sun Mistral wheels (Ukai were original but were replaced under a warranty/recall of sorts back in the day because they would make a clicking noise while riding), pedals (although I have the original 600 toe clip pedals), bar tape (obviously… original was thin yellow ribbon tape) and the tires (old school Panaracers sure did suck!) The color is Onyx Black.

I recently installed some inexpensive 700x23c Michelin Speedium tires for indoor display and some roller riding. I have a set of NOS 700x20c Michelin Hi Lite Comps circa ’88 I can fit if I want it to be true old school.

As cool as all that is, there was always ONE Panasonic I loved more than any other. The 1986 Panasonic Team America with the oh-so-cool tri-color paint fade on Columbus SL frame, Araya Aero tubulars, and full Dura Ace group. It was the UberSonic but it was also unobtainium to me as it cost considerably more than my DX-5000 did in ’88. A bit steep for a kid who had yet to reach his 12th birthday.

Fast forward to May of 2008. The “unicorn” bike that I thought had only existed in a catalog turns out to be real after all these years. I’ve seen a Team Europe or two over the years, and I even saw a Team Japan that I tried desperately to buy about a year ago. With that said, I have never seen my UberSonic… that is, until mid May of 2008 when one magically appeared on eBay.

Yeah, I bought it… $500 delivered to my door, thank you very much. The pic below shows the bike in-progress. I’ll post new pictures once everything is complete. 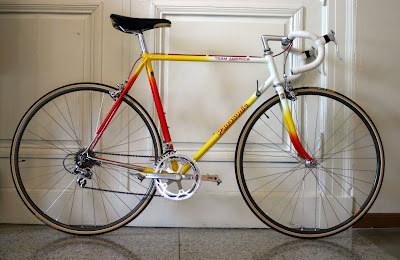 Oh, and remember that cool DX-4000 picture I showed you earlier in this story? Well, as it turned out, the same sale that made my DX-5000 affordable also made the DX-4000 appealing to my own father. He bought the bike and still owns and rides it to this day.