How NOT to Enlarge Your Panasonic Collection 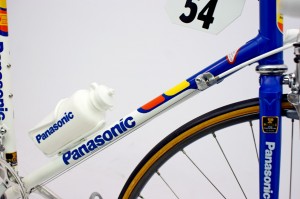 Back when I initially created this web site I did so as a bit of an experiment more than anything else.  I was experimenting with various web content management platforms and needed a topic to build a test site around.  Since my Panasonic DX-5000 was lurking above my kitchen cupboards (yes, I was one of those guys who had lots of bicycles in the house) it seemed logical to do something bike related.  I really hadn’t started doing much collecting of Panasonic bicycles at that point but I did have a couple old catalogs that I dug out and figured I could do something with.

I did a quick Google search and found that virtually the only references to Panasonic Bicycles on the web were quick blurbs at Yellow Jersey Bikes in Madison, Wisconsin and another on Sheldon Brown’s web site.  Not much in terms of catalogs or other in depth information.  Why not scan the catalog I have and put it out there for others who might be looking for information?

Wow!  The ball got rolling much quicker than I had anticipated and before you knew it I had tracked down most of the catalogs from the 1980’s and had even tracked down and interviewed the former sales director for Panasonic Bicycles in North America.  So much for an experiment, right?

Here we are several years later and I’ve realized there are a couple of unexpected downfalls to creating a Panasonic Bicycles web information portal.  For starters?  Now that information is out there, people can do a little research and discover that the dusty bike in their garage is actually a sought after Team Europe model and not some Goodwill donation gas-pipe bike from the 70’s.  In many cases I’ve found that I’ve managed to price myself out of the market thanks to this site giving the bikes “collector status”.  For my fellow Panasonic collectors who were once able to buy really nice models inexpensively I apologize.  *smirk*

I follow eBay and Craigslist on a global scale watching for interesting Panasonic models to come up for sale.  In the last year and a half I haven’t really seen anything really interesting for sale aside from an AR-6000 or two.  No minty Team Americas, Team Europes, or other “unicorn” type bikes for me to chase.  If they DO come up for sale they are often accompanied by an absurd asking price… such is the case with a particularly used looking AR-6000 that has been listed on eBay for months now with a $4,999 price.  I still chuckle a little each time I see that as $1,000 will buy you a damn near perfect example.

Luckily I don’t really have the room to expand my collection since I made the move to the Twin Cities (MN) around 18 months ago.  As it is now, my collection is spread across three states and sooner or later I’m going to have to build a gallery wing onto the house to accommodate all the bikes.  Somehow I think my lovely wife may frown upon that.

For now I have enough project bicycles to keep me going for a while with the AR-6000, PR-6000 and Team Japan bikes all needing some restoration and attention.  Once those are done though I just hope there will be something more interesting to buy out there than yet another Sport 500 model from Craigslist.